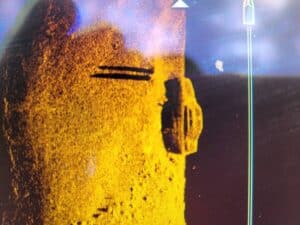 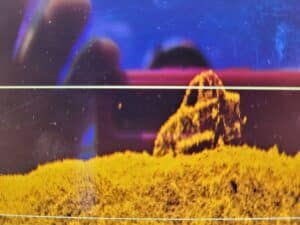 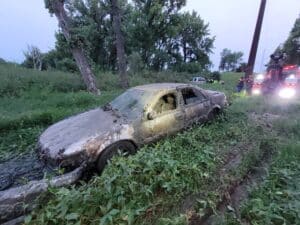 In our last visit I mentioned that with all the extra side imaging I have been doing that I was finding quite a few cars on the bottom of the river. One in particular stood out more than the rest as a “fresh” car. I got many spectacular images of the car with my Humminbird and thought it was very important to report the cars to the Sheriff’s Department.

I posted the screenshots of the car to my business Facebook page, part to show off the unreal quality in the image and also to brag a little that I found an intact car. Many of the comments on the post said the car looked like a Cadillac.

A few days later, joined by the head of Water Rescue from the Sheriff’s Department we headed out to look at the now five cars that I have found so far. I showed them the “fresh” one first and they marked it immediately and said they were going to dive that one at the next training and maybe even raise it.

We spent the next two hours driving around town looking at cars I have found and showing them the MEGA imaging that they still don’t have. While we were on the way back from the Jeep I found a month or so ago, we were idling and visiting. I happened to look down at the imager and find two more trucks. Of course, we had to spend a few minutes getting more images. It was later determined that many decades ago there was a boat ramp in that area and upon further inspection of the screenshots there was a boat trailer at the bottom as well.  (If you are keeping count on cars that is number six and seven for me this year.)

About a mile later I was imaging a spot and found what appears to be an upside-down horse buggy. That was also marked and slated to be risen.

Fast forward to the next day from when we imaged the car. I was invited to come down and watch the water rescue pull it out of the river as a training exercise. How could I not go to that and follow through on the car I found? Afterall, I have never seen a car pulled from a lake or river before.

We arrived just as the tow truck was pulling in and the divers were getting ready to go down and hook up. It took about an hour to get everything set up and safe. Bystanders were cleared back but I was told I could stay with the crew since I found the car. This gave me a front row seat to seeing it come out.

They pulled the car up to the windows where they cleared the area and checked to make sure there was not a person in it. They got the license plate number to start looking for the owner. After a few moments of checking, they pulled it up onto the bank. The care was full of mud and zebra mussels.

Here is what I know so far from the car coming out. The internet was right, it was a 2002 Cadillac Seville SLS. It was last registered in North Dakota in 2006. It was never reported stolen or missing. The windows were all rolled down, the keys were in the ignition and the car was in drive. HMMMM, seems like someone wanted to sink this one. Now many questions remain.

I posted the before and after photos to social media and to this day have never seen a post blow up like this one. Normally a great post for me has 10,000 views this one is in the hundred thousands. As expected, many were proud that they called it a Cadillac before we knew.

Another great experience in the outdoors, this one provided by bad catfishing and Humminbird Side Imaging.