Paddling Back in Time

It’s been a long time since I can say I have been on an actual adventure. I think the biggest reason is I am not a good traveler and frankly I am lazy.

About a month ago while guiding in Drayton I looked at the bank of the terribly low river to find a buffalo skull just laying at the water’s edge. I picked it up and it hit me that I should be watching the shores for skulls because its not always this low.  Fast forward and the water is so much lower.

I was talking to a buddy about his resent walk he took along the bank north of Grand Forks. He mentioned he knew a landowner that allows him to fish a bank spot on his land. I quickly hatched an idea that the two of us should take my kayaks (you know the ones I was going to guide from a few years back) and fish our way to that spot. It has been way to low to get a big boat in safely and the fish have been left untouched for two months. Maybe as a bonus we can find a buffalo skull or two.

We planted a truck at the pickup point then headed back to town to unload and start the journey. I was blown away with how low things are but for the most part it is a few very very bad spots and the rest is just fair.

About a half mile into the paddle, I looked on a sandbar and there was a complete skull. I got out and picked it up thinking this was really cool. A little over a mile out we stopped to fish. Each of us managed a few fish with a couple 12-13 pound catfish as the best fish before we decided we should keep going. Another mile down my buddy found a complete skull that is to this day the best I have ever seen.

We took our time taking in the whole day actually paddling past the pickup point to see what was around the next corner. It was there that my buddy found another great skull on the bank. Before he could finish picking it up, I found one. Over the next 15 minutes or so we found parts of three more on that one sandbar.

We paddled another ¾ mile or so before we turned to come back. We fished a few more spots along the way but that was a side bar to the adventure of what ended up an eight-mile paddle with six buffalo skulls found and what appears to be an elk or moose skull. (I am getting that one checked out to make sure.)

The question for debate now is how old are these skulls? Most think they are from back when the buffalo roamed the prairies and they were just victims of getting stuck in the mud trying to drink or cross the river. Some say it goes back to Indian days. Either way they are cool to find and hang onto.

It was a fun day on the river that we are planning to repeat on another section hopefully soon. The skulls were the highlight but even so the paddle/float was just amazing in that river that nobody has been on in months. Just taking our time to take it all in was an adventure in itself. If you ever have the chance I highly recommend taking the kayaks to small rivers in the middle of nowhere. 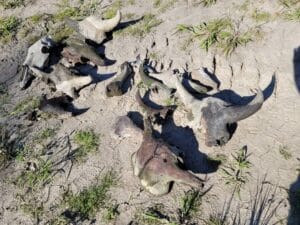