The past couple months I have been down on life some and trying to keep everyone up with outdoor activities. I thought we were going to get on catfishing early then a ten-day cold front pretty much shut that off. It got hot on the back side of that and I was unsure what it would mean for the catfishing but thankfully it spurred the best bite I have seen at Grand Forks in over a decade.

While I was busy guiding customers, sponsors and friends I ended up with Memorial Day off. My mom had been back in Bowbells for graduation and wanted to stop in for lunch and a visit on her way back to Moorhead.  I suggested that if the day remained open that maybe another shot at a catfish. She thought that would be fun.

So, Monday afternoon when she arrived, we headed to the landing at North Grand Forks. Due to word on the street of good fishing and everyone sick of being stuck at home the landing was full of trailers. We got launched and on the water in fairly quick order.

Just a couple minutes into the excursion my mom says, “I forgot to get a license.” No more than finishing that sentence a rod goes down. Braden took the fish, it was little. after threw it back, I sat down to buy her a license on my phone. I paid for it, got the PDF to my phone and said, “you are legal” and BOOM big hit.

She got up I handed her the rod and I thought the fish was going to pull her overboard. She finally decided to sit down and reel it in. What came up was a monster 19-pound catfish. It beat her personal best from all those years ago by 11 pounds.

I guess it was lucky that we had to delay her turn to get a license to move her in the rotation.  Otherwise she would have caught a small fish and maybe not taken the turn at the big one.

We only fished a bit over two hours but caught lots of fish, none as big as the 19 but some in the low to middle teens. We had a family day on the water and made some more memories by ending the day with a triple and getting a photo with three catfish.

Summer is here, its not going to be normal so as I have been saying now for a couple months. Get outside and make the most of it. Make some memories that you can keep with you. I just got a good one and I needed it. 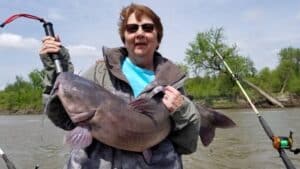