At the age of 75 years, there isn’t much in life that I wanted to do, that I haven’t done. I retired from my real job as an Aerospace executive in 1999 and since that time I have turned my attention to research and writing about freshwater fishing. I started publishing fishing books in 2005 and since that time I have completed three books. Jakes Take on The Lake was released in 2007, Freshwater Fighters was released in 2008 and Beneath the Surface was released in 2010. For my fourth book titled The Catfish Hunters, I wanted to get a younger view of the subject matter so I invited my good friend Mac Byrum to co-author the book with me. At the young age of 73, Mac had a great deal of professional experience Catfishing and some successful national Catfish tournament results under his belt. We decided to make the research for this book an unusual journey. As a pilot and owner of a Cessna 172 aircraft, I was able to reach out a good distance from my home base in Lake Norman North Carolina, to seek out other waters that had become famous for producing record sized Catfish. Southern water produce large numbers of trophy Blue Catfish and Flatheads, but Channel Catfish, although the native catfish of most southern waters, doesn’t grow to huge sizes in these waters.

We wanted to end this book with a new and unique experience so we decided on fishing the Red River of the North. The first problem that we faced was the condition of the river. We had contacted Brad Durick who operates out of grand Forks North Dakota. Brad spends nearly as much time studying the river as he does fishing it and he cautioned us about waiting for flood levels n the river to subside. He indicated that fishing could still be done at flood stage but the problem was, all of the boat launch areas would be closed. We scheduled the trip for late July, but as that date approached the river was still too high so we moved the date to mid-August.

As we talked about this trip with our fishing friends, the standard comment went something like, “are you crazy, traveling that far to catch a few fish”. But we both wanted to improve our personal best Channel to at least 20 pounds, and the Red River of the North was the only place in the United States that offered that possibility. So we packed our bags, took along some snacks and drinks and boarded my plane for the long journey north. 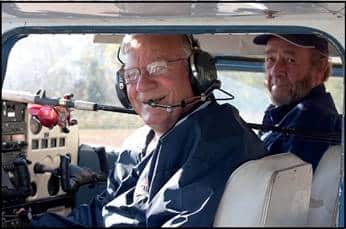 Flying a small aircraft that cruises at about 105 knots, a distance of 1200 miles is a small challenge, and the trip cannot be made in one day. With a fuel and rest stop in Lexington Kentucky, we took an overnight break in Streamwood Illinois, slightly west of Chicago. My brother in law and his wife live in Streamwood, and I knew they would provide a welcome stopover.

The next day the weather was not encouraging for the last leg of the trip. Hugh storms were working their way down from Wisconsin and Minnesota and they were due to enter the Chicago area at about the same time as we had planned out departure. Our schedule called for us to arrive in Grand Forks about midday, to begin fishing the river late that afternoon. Even with my instrument rating and a well equipped aircraft, I was not going to try and beat these storms, so we delayed our Chicago departure until the afternoon, arriving in Grand Forks about 8:30 pm that day. We had changed our arrangements with Brad Durick, to begin the fishing the next day.

We met Brad Durick about mid day the following day and we knew immediately that we had selected a host that wanted us to catch big fish. He had stocked the boat with three different baits, a habit that we had both learned over the years was advisable for the finicky Catfish. Cut Suckers and Goldeye, and Leopard Frogs were the three baits selected. This selection later proved very wise. At both Mac and I were a little confused. Between us we had more than 100 years of fishing experience and neither of us had even heard of using Frogs as bait for the big cats. We knew that the preferred food for all fish is food that is a regular resident of the waters being fished and we never thought of Frogs as roaming into the deeper waters where they would become a meal for a big cat. Frogs tend to habitat the shallow shorelines and grassy areas where they search for bugs and insects as their food. But the Red River of the North would prove to be different. With its many flooded shorelines and log jams in easy reach for both the frogs and the Catfish, the Leopard frogs proved to be the bait of choice the first day. In late afternoon of the first day we found the large log jam shown below and things really began to happen in a positive way. 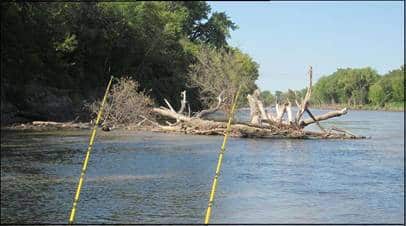 The Leopard frogs suddenly took over as the food of choice and both Mac and I caught several fish in the 18 to 20 pound range. Apparently the frogs make their way out onto these jog jams and are easy prey for the Catfish. Whatever the reason, the only bait that attracted the Catfish at this type structure was the Leopard Frogs. Mac managed to hook a 20.4 pound beauty, which established a new personal best for him. (Shown below) 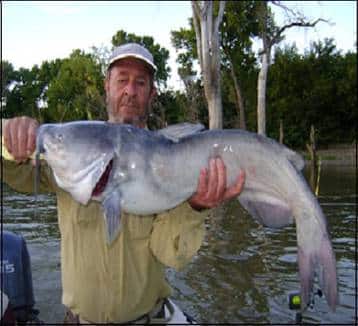 The second day produced similar results. Frogs still retained their popularity, but the Sucker cut bait took on more interest. Late in that second day I was still watching the rods that held frogs, since I felt that my best chance for a big fish was going to be with that bait. As expected, late in the afternoon I landed the 21.8 pound beauty shown below. 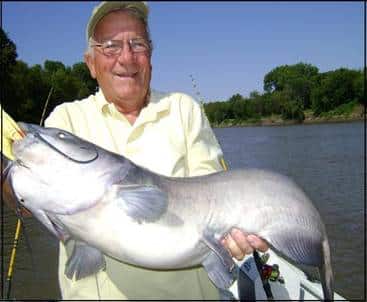 Mac and I had both achieved our objective of catching a 20 pound plus fish, so with a two day catch of 45 fish behind us, we decided to call it a trip.

During the long 1200 mile trip home, there were many memories that stood out in our minds. Since we intended to use much of the material from this trip in our new book, the Grand Forks Visitors Bureau acted as our host, providing us fine hotel facilities for our stay. The weather had cooperated perfectly both days, with a mixture of sun and overcast skies. We were also thrilled with our selection of Brad Durick as our guide, since he had put together a fine fishing plan for us. But aside from all of these fine memories, I was intrigued by the fact that we caught all of the big fish with Leopard Frogs as our bait. The engineer in me started to activate and I needed to do more research on this animal.

The Leopard frog shown below is common to the cooler climate of the northern United States and southern Canada. 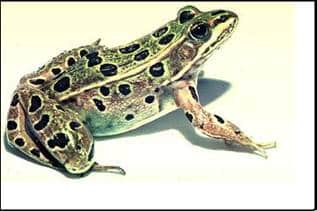 It lives along the grassy banks of rivers and lakes and eats mostly insects as do other Frog species. One unusual feature about the use of these frogs as Catfish bait is the manner that they are attached to the hook. We know that Channel catfish prefer their food dead, so that was the first tack. A number 8 circle hook is them passed down through the head of the frog and then up through the rear as s shown below. 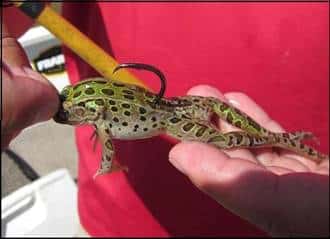 The last step, which I found very unusual, was the rear legs that are brought up and each attached to the hook, forming a tight ball of bait. Experience has proven that if the rear legs are not attached in this manner, the Catfish will grab the dangling rear legs and not take the hook.

The question still remained however, why do the big Channel Catfish prefer Leopard frogs? The Leopard Frog is an interesting species. The internal workings of this frog make it the preferred specimen for school laboratory studies. No doubt, those of us who have been required to dissect a Frog in biology class used a Leopard Frog as our specimen. The Leopard Frog breeds in the spring and it can tolerate a wide range of water temperatures, but prefers water that has heavy vegetation. It also likes to hide in areas that have heavy underwater structure, but is not particularly fond of fast moving water. Its predominant diet is flies and insects may explain its abundance on the days that we fished since the May Flies were very heavy on the river.

There is a good amount of information available about the Leopard Frog, because the northern species contain an enzyme that has shown promise for reducing tumor size in both lung and brain cancer. A unique quality of the Leopard Frog that may explain its attraction to the Channel Catfish, is the fact that most other Frogs have a skin that emits a very distasteful secretion that would be un-inviting as a food source. The Leopard Frog does not produce this secretion but has a sweet taste to its skin and a more attractive smell. We usually think of the Channel Catfish as liking smelly foods, but perhaps the big Cats know more that we think they do, understanding the medical and dietary value of the Leopard Frog.

Regardless of the reasons, we do know that most of the Channel Catfish that we caught on the Red River of the North, using Leopard Frogs as bait, ranged in weight between 15 and 22 pounds, and on both days that we fished this waterway, we caught at least a dozen in this weight range. The success of this trip was defined by our achievement of catching personal best Channel Catfish over 20 pounds. Was the 2400 mile trip worth the effort? You bet it was!

Jake Bussolini is a retired Aerospace executive who lives on Lake Norman in North Carolina. He has already published three books about freshwater fishing they are Jakes Take on The Lake, Freshwater Fighters and Beneath The Surface. His latest book The Catfish Hunters will be released in January. His books can be reviewed on www.freshwaterfighters.com.